Women know how to jump the hurdles & get the job done! 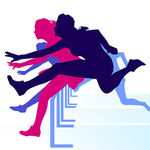 From the time I was a little girl, my two grandmothers and my mother always guided me to know and believe that if you need to get something done, ask a woman!  I offer this as an example:

I have been a career educator in the California public education system – teacher, principal, district administrator, and an administrator of a statewide early literacy project.  I love my career choice.  However, I fully admit that the public education system is a huge bureaucracy.   Tons of hurdles.   I retired in 2008 and now teach research methodology to graduate students in a master’s degree program in education, which allows me guide future educational leaders to learn how to evaluate the effectiveness of their work.  Most of my graduate students are women.

During my entire career, I have remained non-partisan.  However, I have voted in every primary, general, and special election for as long as I can remember.

In 2010 I became more active in politics. In 2011 I was asked to submit my name to be elected as a Delegate to the California Democratic Party – a process that has always been a mystery to me.  Hurdle.  I was elected and discovered that you can join different groups within the Party.  There is a caucus for nearly everything but not an Education Caucus.  Hurdle.

I was amazed!  An Education Caucus seemed to be such a good idea – to provide an organization that would provide teachers, parents, administrators, school board members, support staff, interested community members and others with the opportunity to learn about, discuss, and support our California public education system.  Everyone in pubic education exists in silos and the situation calls out for improved communication and better information about this huge bureaucracy.

I contacted leaders of the Party – in my area, at the county level, and at the state – and discovered that a caucus could be started.  Actually, everyone thought that there was an Education Caucus.  Hurdle.  And when we confirmed that it did not exist, everyone agreed that it was an excellent idea.

Creating change within a political party is a major undertaking!  Enormous hurdle.  Initially, we developed by-laws that reflect our goal to include all stakeholders.  We needed to collect signatures.  Major hurdle.  The Party requirement is for signatures of Delegates.  But we decided that we also wanted signatures of regular Democrats.  Self-imposed hurdle!

So a group of active Delegates and many of my education colleagues sent signature pages via email.  And we collected signatures of Delegates at the State Convention.   They arrived on my fax machine and as scanned documents. We now have a total of nearly 400 signatures.

In May we were informed that the Party was concerned about creating more caucuses, due to the expense.  Hurdle.  And they suggested that we apply to be a statewide-chartered organization.   Hurdle.

The last hurdle will be this coming November.  We will present our petition to establish the California Democratic Education Caucus as a statewide, chartered organization at the Executive Board meeting of the Democratic Party in November 2011.

I am honored to have led this effort but I could not have done it with out the support and efforts of my daughter, family, friends, and colleagues.  It takes a woman with a team to overcome the hurdles.